The Verbruggens produced most of the guns in Holland. Through Amsterdam traders many of these guns were exported to St Eustatius where they were sold to the American Rebels fighting the British forces in North America. 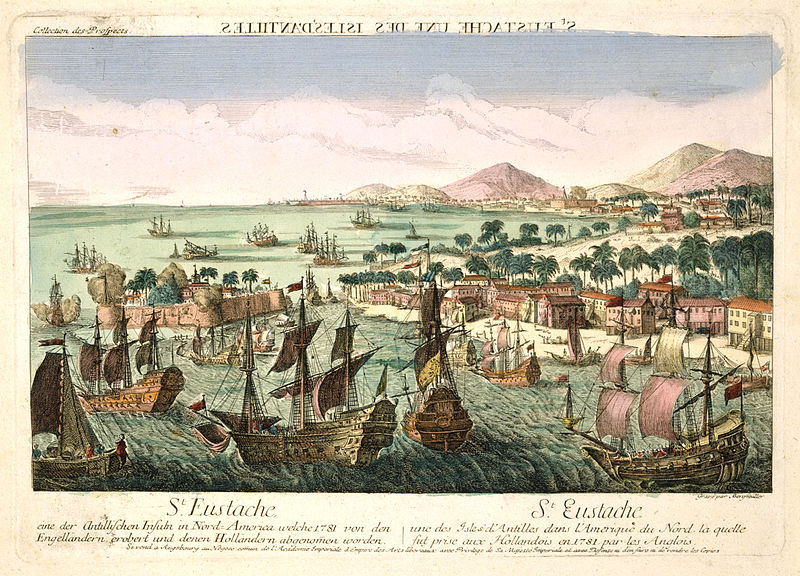 The Island of St Eustatius in 1781: as many as 3000 merchant vessels per year visited St Eustatius: a major trading hub in the Carribean.

In 1776, the representative of the Republic of the Netherlands in St. Eurstatius, Johannes de Graaff, was the first to officially salute the independent USA when a US tradingship entered the harbour of Eustatius. Through this salute, the Dutch Republic became the first nation to recognise the independent USA. The British government suspected this was going on but had no proof until the new Embassador of the US to the Netherlands, Henry Laurens, was captured of the coast of New Foundland with contracts proving the weapon smuggling activities. The Embassador was captured and incarcerated in the Tower of London and the fourth Anglo-Dutch war was declared in 1780.

As off 1779 Verbruggen was producing lighter, more accurate guns for the British. A relatively high number of these guns were required for the final movements of the British Army in North America striking down from Canada over land. The Verbruggens delivered as noted in the minutes of the Ordinance Committee. The fact that the British ultimately lost the Independence War was a.o. due to a conflict between the two generals in charge, not joining forces. The last big campaign was the battle of Saratoga eventually lost by the British forces. The official Surrender Gun was a three-pounder cast by Verbruggen.